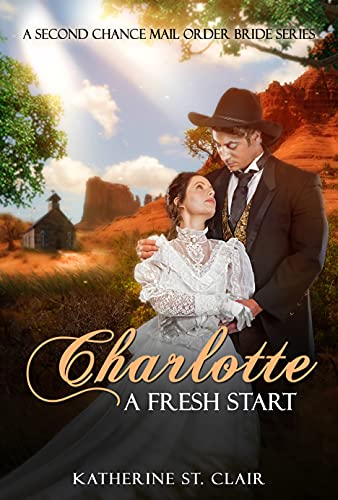 A clean and wholesome historical western mail-order bride romance story that will melt your heart!

Do you believe in second chance? Charlotte Henderson had never expected that she would be answering another mail-order bride ad after what she went through the first time!

Charlotte Henderson’s family risked everything for her to become a mail-order bride—and they lost it all. Now they have no home, no money, and nobody to turn to—and safety is a distant memory. After being on the run for months, it seems they’ve finally found a place to settle down, where they can move on with their lives.

In Darlington, Arizona, Jesse Turner assumes that someday love will find him, but for now, he’s busy enough with his ranch and caring for his ailing mother. When Jesse’s best friend places an ad on Jesse’s behalf for a mail-order bride, Jesse is doubtful…and somewhat irritated. He’s a traditional man with traditional values, and he wonders how anyone could choose a wife on the basis of some words on a paper. It was nonsense, and he would have none of it.

But soon, fate puts Jesse’s advertisement in Charlotte’s hands and for the first time, both of them have a chance at happiness. But will they take it? And can they stop Charlotte’s pursuers before they ruin Charlotte’s life…for good, this time?

Read about Charlotte’s second chance in this story of loyalty, faith, friendship, and enduring love.

Scroll back up and click the BUY NOW button at the top right side of this page for an immediate download!