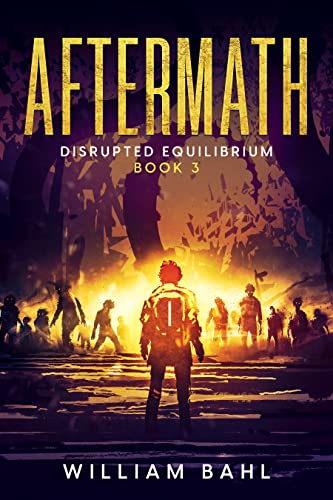 A mysterious contagion devastates civilization. Numbers of infected swell beyond measure, and they are running out of victims upon which to feed. Outlaws roam free, plundering naïve survivors in search of shelter and protection from massing herds of ravenous predators.

Cowboy discovers awakened abilities to control the infected, complicating his shadowy past and uncertain present. Gloria establishes a refugee camp, enlisting Cowboy to protect the few from the many. Luke and his father take flight, joining others on a cross-country trek, fleeing scramblers and criminals. Sebridge, a devious colonel plotting his own course amidst the turmoil, holds Carly and Marik captive. Roger wages a solitary battle, matching wits against psychotic scoundrels and ravenous berserkers.

Tentacles extending from their fingertips, the infected clutch their prey atop the head, curling themselves around the torso. Incapacitated by a jolt of chilling electricity, helpless victims fall, left either dead or turned themselves. Bodies warped by a sinister force, these twisted monstrosities roam free, pulled towards their victims by tendrils of light. With an insatiable hunger for mind energy to sustain them, they bring chaos and destruction wherever they go. Known by different names to the various groups fighting and fleeing from them, the infected prove complex and varied. Fearsome berserkers, cunning hunters, and even more powerful Nameless creatures haunt the land, each one more formidable than the last.

A chilling sense of dread overtakes the world as destinies align, setting in motion an unstoppable fate.

Survival of humans and The Turned hinges on a frightening, unyielding reality.

Cowboy must figure out his place and purpose among humans and the infected. Luke faces unimaginable loss and finds new allies along his path. Carly does everything she can to outlast Sebridge and his maniacal intentions. Roger defies all odds, fighting to live as those around him perish.

Plunge headlong into this tumultuous voyage of incomprehensible despair and courageous triumph in Part Three of Disrupted Equilibrium. Steel yourself for a battle with destiny. Earth’s fate hangs in the balance.