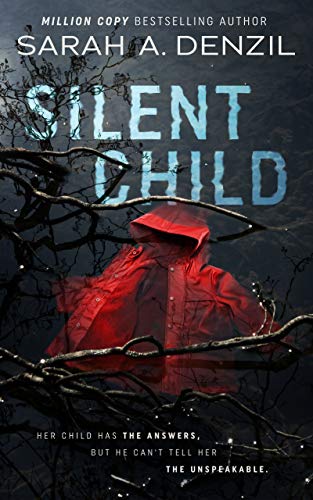 Silent Child by Sarah A. Denzil

In the summer of 2006, Emma Price watched helplessly as her six-year-old son's red coat was fished out of the River Ouse. It was the tragic story of the year - a little boy, Aiden, wandered away from school during a terrible flood, fell into the river, and drowned.

His body was never recovered.

Too traumatized to speak, he raises endless questions and answers none. Only his body tells the story of his decade-long disappearance. The historic broken bones and injuries cast a mere glimpse into the horrors Aiden has experienced. Aiden never drowned. Aiden was taken.

As Emma attempts to reconnect with her now teenage son, she must unmask the monster who took him away from her. But who, in their tiny village, could be capable of such a crime?

It's Aiden who has the answers, but he cannot tell her the unspeakable.

This dark and disturbing psychological novel is a page-turner you will not be able to put down.

What readers are saying about Silent Child:

"Everyone, buy this book, it's brilliant. I just kept reading it, instead of cleaning. Now I'm sad it's ended."

"A tense, haunting story which I had to finish in one sitting."

"What a fantastic read. Kept me on the edge of my seat 'til the end."

"One of the best books I have read. I stayed up most of the night to read it."

"I read this book from cover to cover in one sitting. It's been a long time since a book has captivated me so much to do that. Gripping and full of twists and turns."