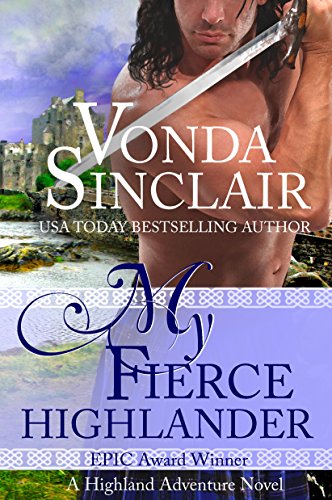 Gwyneth Carswell, an English lady banished by her father to the harsh Scottish Highlands, wants nothing more than to take her young son away from the violence of two fighting clans--her own distant kin, the MacIrwins, and their enemies, the MacGraths. She risks everything to rescue the fierce MacGrath warrior from the battlefield where he’s left for dead by her clan. She only knows she is inexplicably drawn to him and he wants peace as she does. When her clan learns of her betrayal, they seek vengeance. Dare she trust the enemy more than her own family?

Laird Alasdair MacGrath is driven to end two-hundred years of feuding with the MacIrwins. But by taking in and protecting Lady Gwyneth and her son, he provokes more attacks from his mortal enemy. As the danger and conflict surrounding them escalate, Alasdair and Gwyneth discover an explosive passion neither of them expected. With the arrival of a powerful man from her past, a horrible decision confronts her--give up her son or the man she loves.

"Wow! I LOVE Highlanders and when I read My Fierce Highlander by Vonda Sinclair, I fell in love with Laird Alasdair MacGrath at once, and wanted to be the one rescuing him instead. Adventure, fighting, romance, the Highlands--what more can anyone ask for! Loved it!" Terry Spear, USA Today Bestselling author

"I loved the description of the Highlands. This compelling story of two wounded people who each heal the other is spellbinding and simply lovely. I WANT MORE!" Cate Parke

Excerpt
Scottish Highlands, 1618
A stiff breeze carried the scent of bruised grass and blood on its icy breath.
Death.
Gwyneth Carswell dropped into a crouch and peered through brambles at the tartan-clad bodies, a dozen or more, lying in the dusky gloaming. While gathering herbs earlier, she’d heard the sounds of battle—men shouting, steel clanging, horses screaming.
A chill shook her. The men of the MacIrwin clan, her distant kin, lived and died only for a skirmish. Her sheltered upbringing in England had molded her into the person she was, a lover of peace, but she’d been in the Highlands long enough to expect brutality at every turn. Thank God her son had stayed in the cottage with Mora.
“More senseless death,” she whispered, yearning to run and hide in the cottage, curl up beneath the blankets, and forget she was a healer. Forget all the drained blood and horrifying wounds that would never heal.
But she must not. She must again face death all around her. Dread and nausea rising within her, she covered her nose with a handkerchief. After peering about to make sure she was alone, she crept onto the soggy moor and forced herself to look at the butchered bodies of her cousins…and their enemies. Who had they been fighting?
Pressing her eyes closed to block out the slit throats and other mutilation, she murmured a prayer, both for their departed souls and for strength that she might keep going.
Please, allow me to save the life of at least one.
A haunting groan floated on the breeze. A sign? Her prayer answered? Gwyneth froze, listening. The groan sounded again, straight ahead.
She rushed to the far edge of the clearing.
Daylight dwindled, but she knew she’d never before seen the injured man, a large warrior with long dark hair, obviously from the enemy clan. She could not tear her gaze from his clean-shaven face, smeared and spattered with blood. Never had she seen such a striking man. But something more captivated her, something she could only sense with her woman’s intuition. She yearned for him to open his eyes, but he didn’t.
Blood soaked through his white shirt and fine, pale-blue doublet.
Kneeling on the damp ground, she attempted to press her hand against his chest to feel his heartbeat, but a rolled-up parchment lay in her way within his doublet. She removed it and checked his heart. The thump was slow but strong and steady.
Her eyes locked to his face again. Enticing, yes, but still an enemy.
Amazon - US Amazon - UK Amazon - CA
Genre: Historical, Romance
Book Length: Novel - 150-320 Pages